Sitting here with my feet up on the eve of the Boston Marathon I reflect back on SwimRun Lake James. It seems like so long ago but it was only last week. This week has given me time to reflect on the race, what went well, what went not so well and what we need to work on. For those that don’t know much about SwimRun, it is an endurance event that includes alternating stages of swimming and running, so you run in your wetsuit and swim in your shoes. You are also allowed to use paddles, pull buoys and fins, but you must finish the race with everything you started with. And the best part of it all is that it is a team sport, so all of this is done with a partner, together. Each race is so unique, as it utilizes the terrain and topography of the location, so some races may have more swimming than other races, some races may have a mix of trails and roads and some may have bushwhacking. The one thing that all SwimRun races have in common is teamwork, motivation, fun, passion and adventure.

So naturally, David and I were a team, Beauty and the Beast to be more precise. We have plenty of endurance training and racing between the 2 of us but this type of event is a brand new adventure. Since we left Seattle, 6+ weeks ago, we have tried to swim as much as possible along the way. We both have felt like we have had some good pool swim training but not much in terms of open water. In fact, prior to race day we had exactly 2 open water swims since October 2017.  This proved to be our big downfall in a race that was very swim heavy. We were happy to have had those 2 swims, this allowed us to get a feel for being tethered together in the water and the transitions but it was really a lack of swim training in general that set us back. Not all teams will tether together, but we decided to try it, and for us it worked extremely well. It allowed me to swim in David’s wake, making me a bit faster and not have to sight, as all I had to do was follow his feet. Going forward, we know that we need to put some more time and energy into swim training, specifically open water. 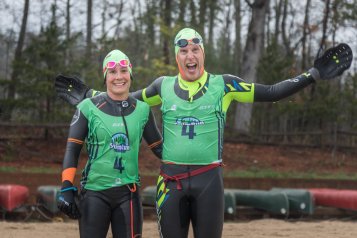 The water temperature was extremely cold, 56 degrees. This is the coldest water I have ever swam in. It is the type of cold that takes your breath away, freezes your face, and can lead to hypothermia quickly if you don’t generate enough heat. The first few SwimRun segments went well and we both felt pretty good leading into the long run, 7.5 miles on a combination of fire roads, trails and bushwhacking. We had a good pace going, with some walking in between, but we actually passed quite a few teams during this section. We were able to warm up significantly on the run, which was great as it was followed by the longest swim, 1 mile. For David and I that meant over 30 minutes in very cold water and a section of the course that I will refer to as the “Beast Tamer”. It was several sections of moderately long swims followed by very short run segments, not long enough to warm up and I was shivering uncontrollably. I was a bit foggy, mentally, and at this point could not imagine getting back in the water for another swim, no matter how short it was. I did some jumping jacks, push ups and squats before taking the plunge back into the frigid waters. I didn’t realize how “foggy” I really was until I began to warm up during the next run segment, 1/2 mile run. At this point I was really dreading getting back in the water and knew we had one last long (almost a mile) swim followed by another shorter swim before the finish line. I knew David was probably just as cold as I was but he was the glue that held it together during this section. He was so mentally strong and was able to encourage me and support me and keep me going despite how I was feeling. Don’t get me wrong, he would never put my health or life in jeopardy, he knew that I was not in trouble physically and that I just needed to keep moving forward. It was a mental game at that point and if this were an individual sport I am not sure I would have kept going on my own.

The last long swim was brutal to say the least. It seemed like an eternity to get through this section and the shoreline never seemed to get any closer. All the teams that we had passed on the long run all passed us during this swim segment. We both felt like we were working extremely hard but were getting no where fast.

The running sections were just as challenging. It started with a 2 mile run on the road, the first mile uphill. That was some way to start a race, where your heart rate is already elevated from nerves and everyone runs like lightening out of the gate! There were sections which had no trails, just following flags through the woods. There was up climbing through pricker bushes and thick, slippery mud, down climbing, or more like sliding on your butt through the same thick mud. Navigating tress and branches and some fairly technical trail running. All which I love, except the pricker bushes!

Our goal for this race was to finish with smiles on our faces, and that we did. It was extremely challenging, pushed both of us outside our comfort zone, both physically and mentally and made us excited for another new sport. We have some things to work on and can’t wait for swimrun race #2, IGNITE Minnesota on July 28th.

I also want to say a big thank you, to Kristin and Brian (race directors) for putting on an amazing race, the outstanding volunteers, in and out of the water and all the other competitors who made this race a day to remember.