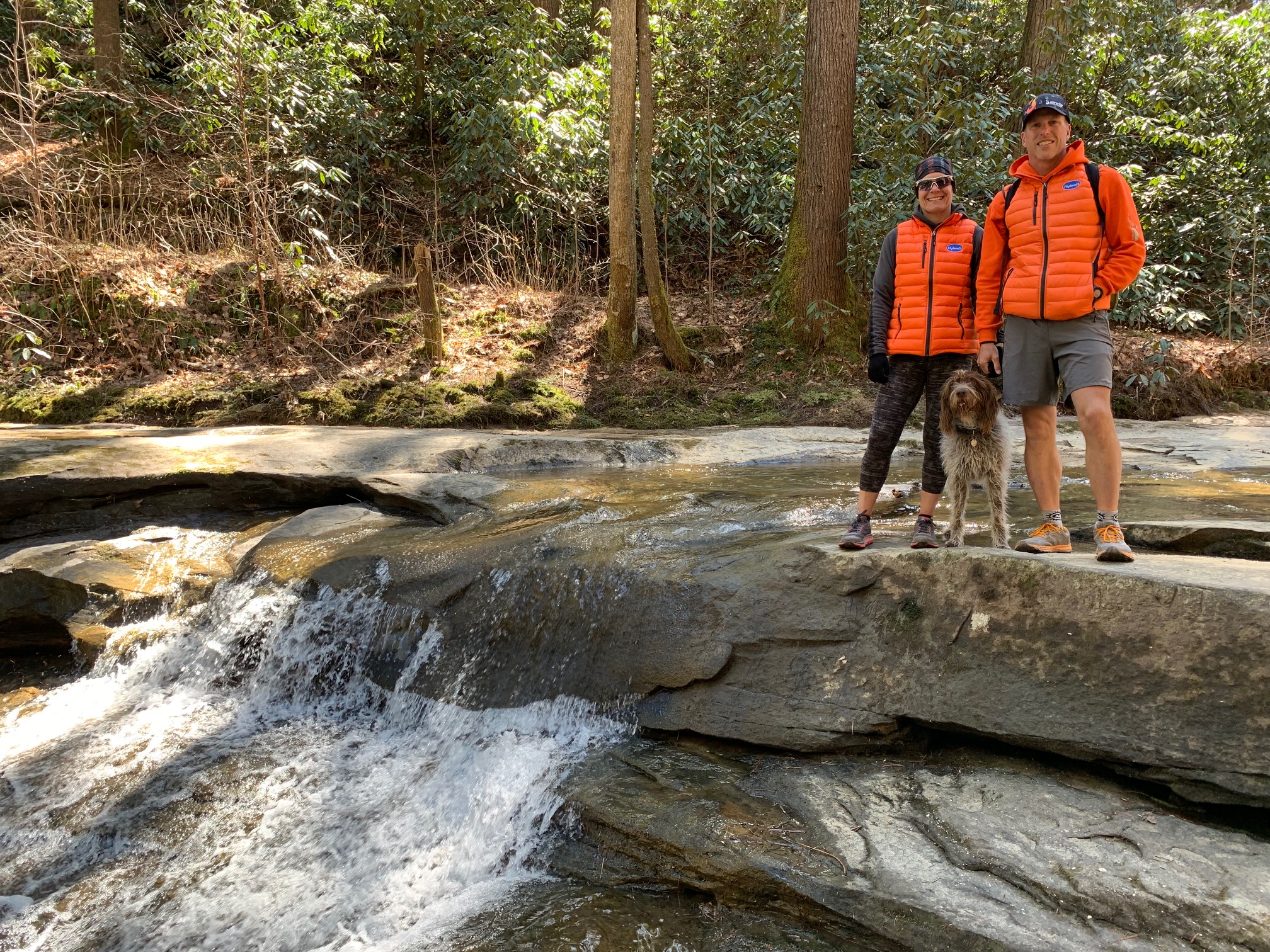 It was difficult to leave Stillwater, Oklahoma, but it was time to start heading toward Boston. We decided to make a stop in Emporia, Kansas to see some old friends and spend a little more time with the ones we just saw in Stillwater. Becky and Steve are genuine, generous people who hosted us back in June 2018 (when the temperature reached 90+ degrees outside) and again as we were passing through town. We love spending time with them and they even got me out for a gravel ride, (which by the way I absolutely loved!!). It was my first bike ride in almost a year. I may have to take the plunge and purchase a gravel bike at some point in time, the Land Run Double has my name written all over it!! We were also able to spend a day out at one of our favorite state parks, Eisenhower State Park. We camped out in “our” spot that we spent so much time at and ran some trails. Our time in Kansas was short but extremely fulfilling.

From Emporia we headed east to Kentucky. Neither David nor I have experienced Kentucky and we didn’t really know that there are so many great places to explore. We spent a little less than a week in different parts of the state, starting in Jefferson Memorial Forest outside of Louisville.  We ran the trails on two different days, camped out and got locked into the park! After some back and forth phone calls to the office, we were able to get out and move on to our next stop, Red River Gorge. Red River Gorge is one of the premier rock climbing locations in the east. It is located in the Daniel Boone National Forest in east central Kentucky. The intricate canyon system features an abundance of high sandstone cliffs, rock shelters, waterfalls and natural bridges. There are more then 100 natural sandstone arches and over 60 miles of trails. We spent several days in this area exploring the natural bridges, hiking and trail running. This part of Kentucky is absolutely breathtaking and worth the trip to Kentucky. 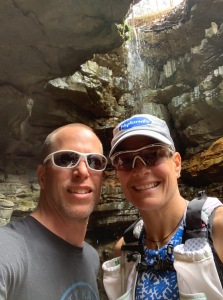 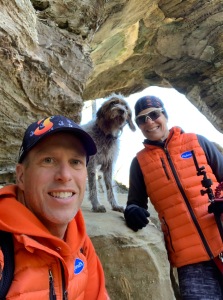 We left Kentucky to continue our journey eastward, West Virginia was our next stop. The last time I had been in West Virginia was over 20 years ago when I was a camp counselor, was severely injured in the backcountry and air lifted to Morgantown where I spent 20 days in the hospital recovering from burns to 20% of my body. This was life changing for me in so many ways and definitely shaped my future as a medical provider. I was looking forward to retuning and making some new, more positive memories.

I had remembered West Virginia being rugged and remote but a wonderful place for outdoor activities. We landed in Fayetteville in the New River Gorge for a few days. There is an abundance of outdoor activities in this area including rock climbing, hiking/trail running, mountain biking and white water rafting. The scenery was spectacular and the hiking/trail running was perfect for our training. We met some really nice locals who gave us plenty of tips on places to explore, including Mike from Bridge Bound Campers. He is an avid rock climber who once lived out of his van and has now settled in West Virginia with his family, building out custom vans. We were able to visit him at his shop and talk about all things van related. I could see the sparkle in David’s eyes as they were talking about electrical systems, solar, water systems, etc… As with all of the other places we have visited on this journey, so much of it is about the people we have met and Fayetteville was no different. 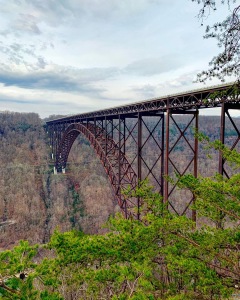 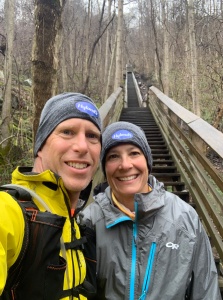 After a few days in and around Fayetteville, we drove to the east side of the state and Monongahela National Forest for one more day of hiking before leaving  and heading further east. 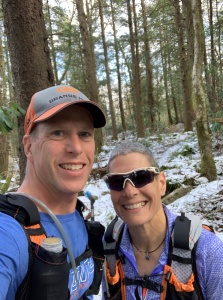 On to Maryland and Greenbrier State Park, the location of IGNITE Maryland. We wanted to stop here and explore the trails since we will be back on May 11th for the race. We had so much fun running all the trails, as you can see by our video (check out our video here). David and I are lead ambassadors for IGNITE SwimRun and have been given this incredible opportunity, not only to be a part of an amazing company and represent their brand but also to learn more about race organization and logistics. This year we will not be racing. We will be working, helping set up the venue prior to the race and on race day David will be taking photos while I do race support (and anything else that is needed). As much as we both love to race we also love to learn about the behind the scenes and the intricacies of race management. We will also be a part of the ambassador summit that will take place after the race. This is where we will get a chance to really get to know our fellow ambassadors and talk about all things SwimRun, training and racing!! 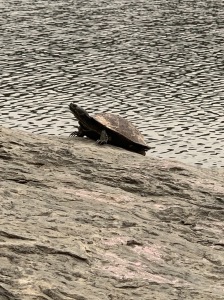 While our time in Maryland was short, we did get to spend some time with our friend and fellow IGNITE ambassador Maggie. We met Maggie last year at several SwimRun events and it was great to catch up with her outside of a race. We were also able to meet another fellow ambassador, Meghan, for breakfast one morning before we headed out of town. 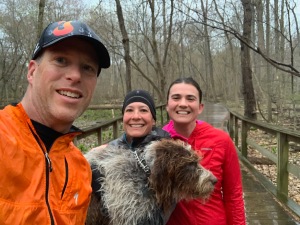 Next stop Pennsylvania, specifically Pine Grove Furnace State Park. This park is located in south-central Pennsylvania at the northern tip of the Blue Ridge Mountains in the Michaux State Forest. It  is the mid-point of the Appalachian Trail, the 2,190 mile trail that runs from Georgia to Maine. It is also the location of the Buck Ridge Burn 5k and Half Marathon. We had volunteered to trail sweep the course so the day prior to the race we went for a run/hike along the AT to the Pole Steeple overlook. The trails in this part of the country tend to be rocky and rugged and in thick forest and this was no different. We had perfect weather and some beautiful views at the top. The next day we were trail sweep for the 5k and ran the half marathon. Yet again, we made so many connections including Jen, the race director, Tammie and Jeff who are about to start their van life journey and Colton and Maggie, a young ultrarunner couple. As with all of the other places we have visited on this journey, so much of it is about the people we have met and this was no different. 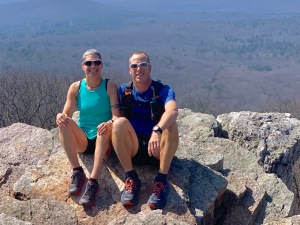 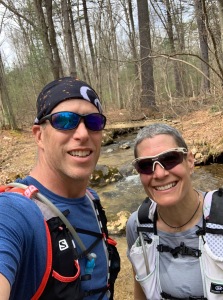 On to New Jersey, our last stop before Boston, where we would visit some family for a few days. It is always nice to spend time with family that we do not get to see too often. Robin and Michael and Elaine and David opened their home to us and we had a wonderful time catching up with them. We had some nice weather to explore some places that I had never visited (despite the fact that I grew up there). 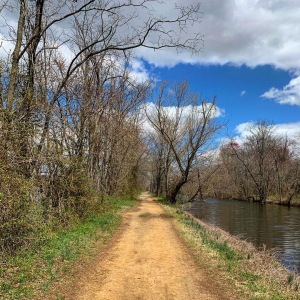 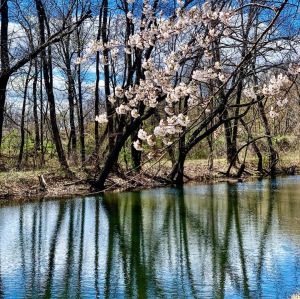 After a few days in New Jersey it was off to Boston for the Boston Marathon. We could not have been more excited to be going to Boston for the third year. This time, not to race, but to support the amazing team of  Hyland’s Healers and Legacy runners, 65 people strong. The experience in Boston was incredible and certainly deserves its own post. So until next time….

6 Comments on “Going to Boston”