As we pulled into Boston a feeling of excitement, anticipation and a little bit of sadness came over me. Don’t get me wrong, I was so thrilled to be in Boston for the 2019 Boston Marathon but I wasn’t going to be running. David and I had tried to qualify during the final weekend in September but neither of us had what it took that day. We were both so disappointed that we wouldn’t be making a 3rd trip to Boston but we both thought, hey we could go somewhere different, somewhere we haven’t been. Several months went by and I was a bit jealous reading about all my Hyland’s friends who qualified and all about the new team of Hyland’s Healers. Of course I was super excited for all of them but also wishing I was joining them. Then came the email from Lisa, asking if we would join Hyland’s in Boston as support staff. As I read the email out loud to David, tears flowed and my voice cracked. I was honored and delighted that they would ask me to be a part of a very special experience. They wanted me to be a part of a team of dedicated Hyland’s employees who make the Boston Marathon an amazing, unforgettable experience for their team. I looked at David, and although I knew he didn’t have a great desire to drive back to the east coast, he didn’t hesitate to say, “of course we have to go, how can we pass on such an incredible opportunity”.

The weekend started out with an employee team dinner.  We got an opportunity to catch up with people we had met in years past and meet new people that would quickly become our Hyland’s family. Margot spoke about the Boston Marathon, what it has meant to her and what the future of the relationship between the marathon and Hyland’s looks like. We had such a great time and felt really welcomed, as always.

Friday was an extremely busy day for me. I worked for a few hours in the morning, David and I went to the expo and walked around and then I worked the Hyland’s booth for a few hours. It was extremely busy throughout the afternoon and into the early evening. I educated athletes and non-athletes about our products, talked to people about the race, encouraged first timers and met some really inspiring and dedicated athletes. I was also able to meet some of our incredible Hyland’s Healer and legacy team members for the first time. David and I then went to dinner with Mike (Hyland’s coach) and Mitch (employee) and had a terrific meal over fantastic conversation. We walked back to the hotel to sleep as we knew Saturday would be just as busy. 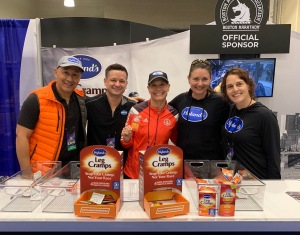 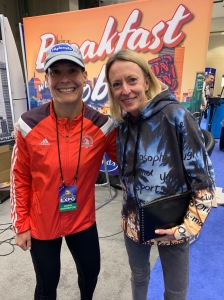 Saturday started with  the BAA 5K. This was the first big event for the Hyland’s team, as a team. We all met at the athlete hotel where there were lots of hugs and smiles and conversation. David and I felt like we had known these people for years (some we have known from previous years) even though we were just meeting in person for the first time. I mentioned in a previous post that some people feel that friends you make on social media are not real friends, but I disagree. We had all become acquainted through discussions on our Facebook page and a few emails, over the course of many months. Following each others training and the ups and downs that come along with that, as well as other happenings in their lives, I felt as I was seeing old friends that I had not seen in a while.  The race was crowded but the energy was electric. I lined up with David’s pace group but quickly lost sight of them as they pulled away from me. I had a great time taking pictures and video and despite all that I was extremely happy with my performance. After the race was a team brunch at Margot’s house. This was a fun filled event for the team only where there were lots more hugs, smiles, laughing along with good food. Margot gave a heartwarming welcome speech and I am pretty sure there wasn’t a dry eye in the room. David went off to the Red Sox game at Fenway with a bunch of the team while I went back to the expo to work. Although it is a lot of talking and repetitive information (for me), I found it so rewarding to feel like I could potentially save someone’s race come Monday. I again met some incredibly inspiring athletes. 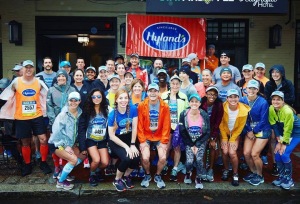 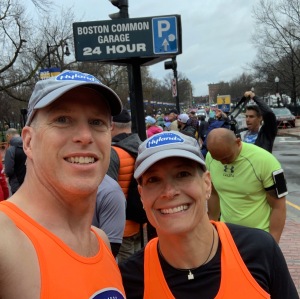 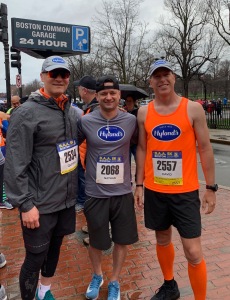 Sunday we woke early and walked to the meet up location of the 7th annual #BostonRun. This is a run lead by Zoom Multisport. It is approximately 4 miles and we run so it spells out Boston on your watch app and Strava. There was a huge turnout and a few us there sporting our Hyland’s gear. We had a nice easy run, enjoying the conversation and the company. After the run we were off to the team and family brunch where we had another chance to spend time with the healers and legacy teams and meet their families. We had a very special guest join us as well, Dave McGillivray (Boston Marathon RD and runner extraordinaire). He spent time saying hello to each of the athletes, chatted a bit and took a picture with every one of us. He is a humble and genuinely nice person and we were all so thrilled that he took time out of his very busy schedule to meet all of us. Then it was off to the expo for the final day of packet pick up. We were busy right until the very end, giving out the last of our product samples and wishing everyone a great race day! It was off to dinner and bed as we knew race day would be another long but rewarding day. 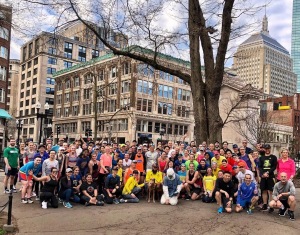 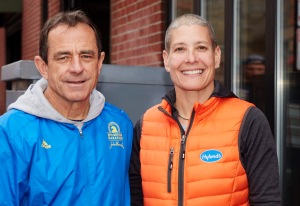 Race day, Monday, Patriot’s Day started out with a repeat of the weather from 2018, with the exception of the temperature. It was windy and pouring with thunder as the athletes boarded the bus which would take them to Hopkinton. As they drove away the weather started to clear and we were crossing our fingers for no more rain. David, Mitch and I drove the van to the University Club where we unloaded all the athlete bags into the club for them to have after the race. We then met up with Catherine (Hyland’s pharmacist) and drove to several of the aid stations on the course to make sure our product was placed correctly for the athletes. Once that was done we headed back to Boston, parked the van and headed to the University Club to wait for the first of our 65 athletes to arrive. It is so hard to describe the atmosphere in the University Club. It is electric to say the least. This is how it works, the athlete crosses the finish line and is met by Margot or Lisa or Elyse and escorted to the University Club where they are escorted inside, down the hall into a room full of more Hyland’s employees, families, friends, other athletes, all who are screaming and cheering and yelling and hollering for you (the athlete who just finished the Boston Marathon). There is a DJ with music playing, an abundance of food and drink, a professional photographer (to take some amazing post race pictures) and the best showers and locker room you have ever seen. You are escorted with your bag into the locker room so you can shower and change before returning to the party to eat, drink, dance, sing, mingle, tell war stories and cheer on your fellow athletes finishing. This year, David and I got to be a part of the cheering section, a job we took very seriously as we had no voice by the end of the evening. We cheered and laughed and ate and drank until the last of the team arrived and then continued to have fun until well after 10pm. 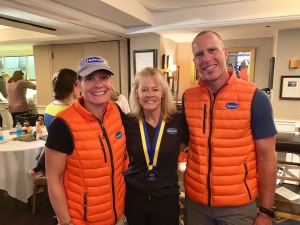 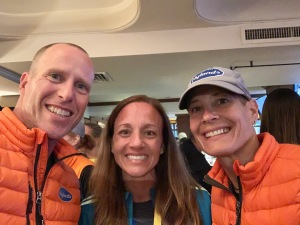 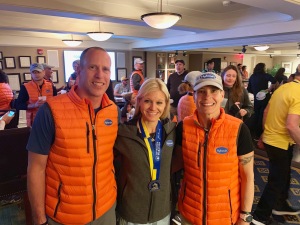 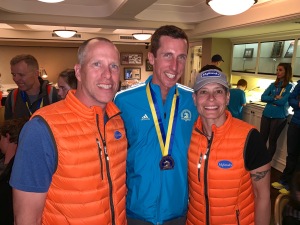 The weekend was  everything we had imagined and more, being on the other side, supporting a team of dedicated, compassionate and passionate health care workers and legacy team members was such a fulfilling experience. Being a part of big goals, lifelong dreams and memories and friends that will last a lifetime is absolutely priceless.

“Surround yourself with people that reflect who you want to be and how you want to feel, energy is contagious” -unknown 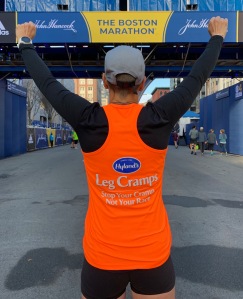 ← Going to Boston
Beyond Boston →